A Record-Breaking Loss: Elon Musk Loses Over $16 Billion in One Day

No longer is Elon Musk the third richest person in the world after he lost over $16 billion in one day.

Musk’s net worth loss of $16 billion on Tuesday was the largest single-day drop ever, leaving him with a net worth of $82.3 billion, according to Bloomberg Billionaires Index. This incident occurred in just six hours of trading; and while other companies saw a dive in stocks, Tesla faced the worst drop with their stock plunging 21 percent on Tuesday.

The 21 percent drop occurred after news about a possible partnership between competitors General Motors and Nikola Corporation.

Prior to Tuesday, Musk placed number three on Bloomberg Billionaires Index after Jeff Bezos and Bill Gates, however, Tuesday’s incident brought Musk down to the sixth place.

On Wednesday, shares of Tesla jumped by 11 percent, making up for some of the losses the prior day. 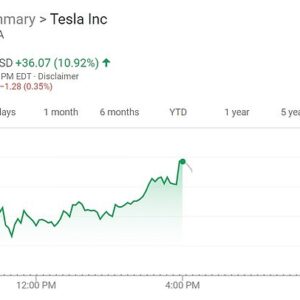 As of Friday, Bloomberg Billionaires Index lists that Musk is in fourth place with a net worth of $91.5 billion.