The Art Of Banksy

Imagine if millions of people around the world admired your creative works and viewed you as an icon, yet had no idea what you even looked like. For the famous artist, political activist, and film director Banksy, this is reality. Born and raised in Bristol, England, Banksy has kept their identity a secret since 1974. The artist’s real life is so hidden from the public, there are even conspiracy theories that Banksy is a group of multiple artists collaborating. Though the truth is unknown, suspects believe Banksy is 46 year old Robert Gunningham. Regardless, people around the world continue to admire the work and the messages portrayed within each piece Banksy curates.

The main factor that separates Banksy from other artists is how he began displaying his artistic abilities through graffiti art. By utilizing public spaces as his canvas, he was able to create the same hypnotic effect of ads and billboards. Within this, the messages behind the artwork are broadcasted to the entire city. Ever since then, he has broadened the type of art he creates while staying consistent with motifs such as: rats, police officers, rioters, children, and the elderly. 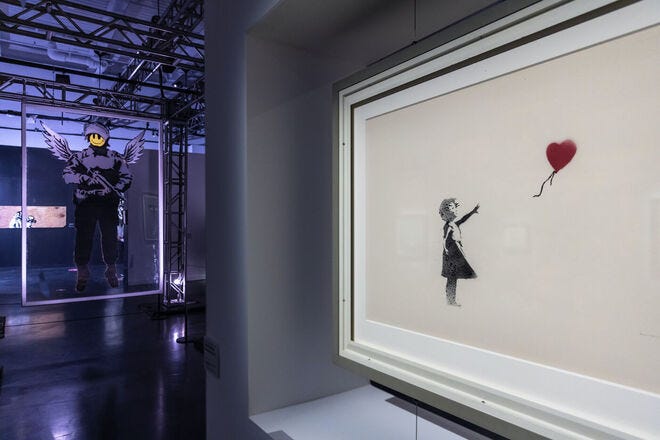 From August 14 till October 31, “The Art of Banksy” exhibit opened in Chicago for the public to view. The art exhibit held a collection of 80 privately owned original and authentic works, which made it the largest display of Banksy’s work. The estimated total of all the Banksy art in the exhibit valued at $35 million dollars. It even included 3 unique prints and an original of “The girl with the Red Balloon”, which is one of his most famous works created.

Through the artist’s work, his audience clearly understands his vision to make the world a better place. It truly is inspiring how he utilizes his artistic abilities to share political and social issues that need to be addressed. Thus, why collectors of Banksy’s art have come together as a community to transform their privately owned works into something that the public can enjoy. Though the pop up in Chicago has already taken its run, “The Art of Banksy” is in the works of being relocated to San Fransisco and will open on November 22. Other relocations that follow consist of pop-ups in Boston and then Denver, which will begin early next year for the people of the world to see.