One of York College’s talented alumni’, Nacha Kama, recently returned to the college to unveil her latest photography art exhibit, “The Eye of Owerre-Olubor.”  The art exhibit was open to the public and took place in the Fine Arts Gallery from February 6-24, 2017, showcasing the beauty and uniqueness of her homeland, the Delta State area of Nigeria. 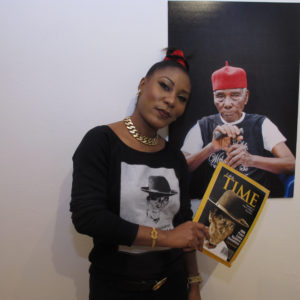 The photographer and princess of the Owerre-Olubor Kingdom began shooting for the exhibit in 2006, after her grandfather was longing for the family to come home for a visit.  Her visits to Africa continued throughout the years, as her grandfather, HRM Prince Ezinna Ngaboso Onwumena, was made Ogwude (King) of Owerre-Olubor in 2014, and after his death in 2016.  Although Kama’s mom was her grandfathers favorite child, he was overall a great man, and his passing inspired her to reflect the man that served Nigeria for 37 years and the everyday life of the people within the village.

The vivid, detail-oriented photos she captured during her stay in the Niger Delta Region for her ongoing project stimulate the mind, and tell their own story. 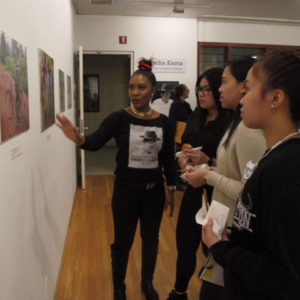 “The exhibition is incredibly personal because she’s talking about her grandfather and she’s also reconnecting with the area her father is from,” said Kama’s former professor Sally Boon-Matthews.”  “I think you can easily use photography and art in a very therapeutic way, and to dig deeper into your own identity and figure out that your life is much bigger. Often we think things aren’t valid and we hide them, but when you do an art project you sort of expose yourself and the world to others. Therefore I think this exhibit is very exceptional.” 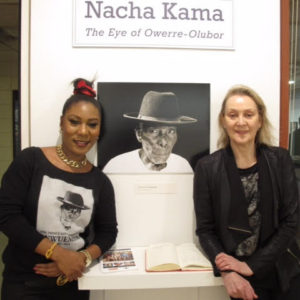 Ms. Kama began her days of professional photography on the first floor of York College, in Professor Boon-Matthews Photography I class. Although it was a basic photography course teaching beginners techniques on how to film in black and white, initially it was not Kama’s favorite class.

“I took photography as an elective,” said Kama. “I had another elective to take so I decided to actually make it an art elective because I thought it would be an easy A.  I took the class and thought it was digital, but when I got into the class I saw it was black and white and I had to roll up film.  It was boring and frustrating, but professor Boone encouraged me. A lot of teachers always have a way of actually seeing something in students that they don’t see in themselves.” 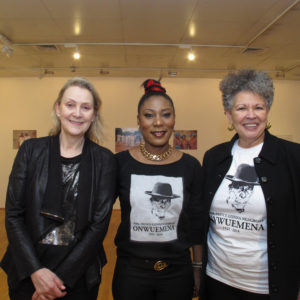 Professor Boon’s motivation uplifted Kama and built her love for not only shooting in black and white, but putting things into frame, editing photos, and going into the darkroom. Boon’s words led her to broaden her knowledge of photography in Digital Photography II, III, pinhole (building a camera from a shoe box), and etc, later declaring her minor in Studio Arts and Photography, and turn her studio apartment in NYC into an actual studio.

“She was the biggest cry baby in my class, but then she became the best student” said Professor Boon, as Kama embarrassingly laughed and smiled, walking away. “She would always say it’s too difficult I don’t know how to do it, but then she persevered and now she has a show.”

During the opening reception of the gallery, Kama was very inviting. She handed me her camera and taught me several tricks to good digital photography, including rule of thirds, aperture, and ISO.  She also went into depth about a few of her photographs, including the making of cassava, and many viewers favorite photo of her resting her hands on top of her grandfathers as he prayed for her.

“All my pictures are amazing to me,” said Kama during the exhibit. “It’s not about the camera, it’s all about the person behind the lens. I would describe my photography as epic, classic, and exceptional.”

During Ms. Kama’s days at York College, she took a trip to the MoMA museum for class and recreated American photographer, Irving Penn’s, “Girl In Bed on the Telephone” and Malian Photographer, Malick Sidibé’s, “With My New Bag, My Ring, My Bracelet.” Her recreation of their timeless photos helped shape her courage in photography.

African master, J.D. ‘Okhai Ojeikere, is also one of Kama’s role models in photography. Ojeikere is known for documenting hairstyles, and to this day one of Kama’s black and white photos of a hairstyle she created is confused as a piece by the late Ojeikere.  Kama met him by coincidence through his daughter-in-law, who owns photography studio Picture Works in Lagos, and from there he became an amazing father figure to the artist. He taught her everything she needed to know and granted her several opportunities to express herself, including working on a few series together.

Nacha Kama also shoots family portraits, and would love to do one for the Obama family. She is currently working on a project to be released by the end of 2018.

Previous ArticleThe 2017 Rolling Loud Festival: The Festival Everyone is Talking About
Next Article"So Nycee you got to Say it 2wice" - Next Up: Nesha Nycee
NIPSEY HUSSLE TUC RECAP