The timeless designer’s pieces are more than just a handbag, they’re works of art.

Judith Leiber’s intricate and fascinating bags are indicative of her versatility. There’s nothing she couldn’t create, whether it’s using Swarovski crystals, rhinestones, and semi-precious stones on her decades long career.

Leiber’s quirky designs consist of dogs, swans, watermelons, pink frosted cupcakes and anything in between which have and remain a cult favorite. From the Upper East Side to the red carpet, the handbags can sell from anywhere around $6,000 and up.

Her designs are more than fashion , but they also are art pieces, and are auctioned off as such. The Metropolitan Museum of Art hold 80 pieces of her work in their collection.

In the name of two New York exhibits honoring the 96-year old’s life and career, Judith Leiber: Crafting a New York Story  that opened at the Museum of Arts and Design(MAD) on April 4, as well Brilliant Partners: Judith Leiber’s Handbags and the Art of Gerson Leiber which  is currently on view at the Long Island Museum in Stony Brook, Long Island, New York- here are five things you probably didn’t know about the handbag designer:

1)Her signature designs stemmed from a mistake 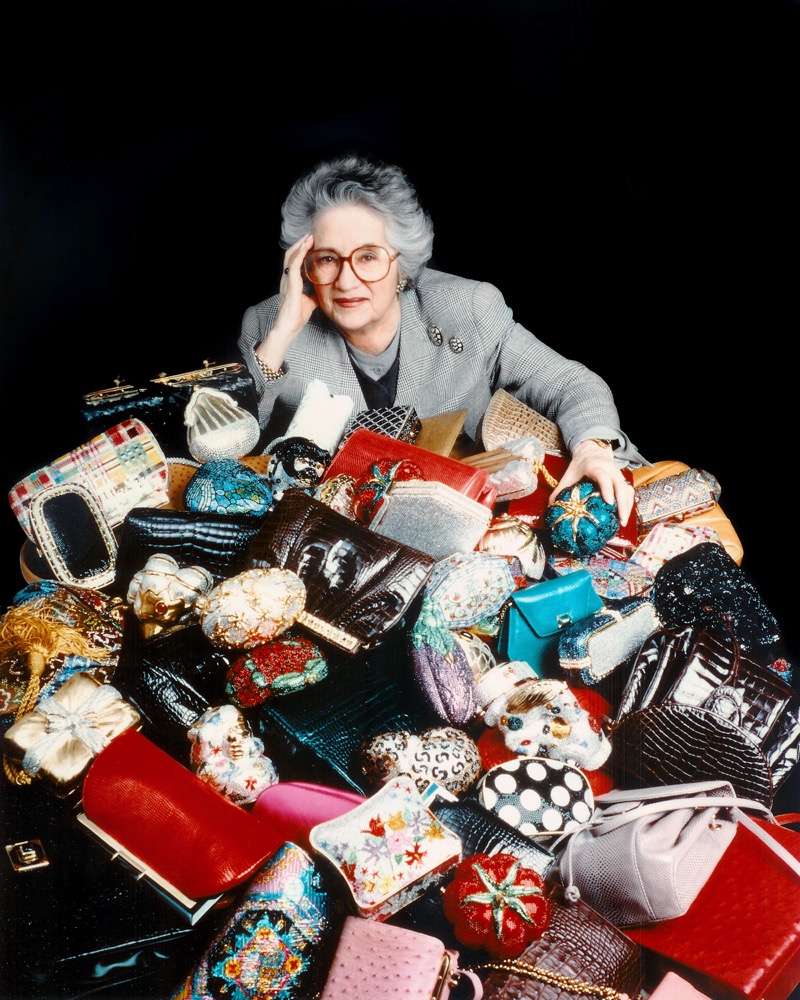 Leiber’s favorite bag of all is her delicate an elegant 1967 Chatelaine design because it was the very first metal bag she made. It was also the turning point for her career. The samples for this bag didn’t come out as good as she hoped they would. The bottom of the bag appeared a bit green so to remedy the bag, she applied crystal rhinestones. With that, needless to say, her bag became a hit which propelled people’s interest in the rhinestone beaded bag.

Leiber made some quick sketches but never fully put her ideas on paper. She preferred to go straight to the cutting table with her ideas.

2) She survived the Holocaust and WWII era

At the very beginning of WWII, Leiber went straight to work at a handbag manufacturing company . where she worked her way up to master craftswoman. When the war started reaching its boiling point, her family lived with 25 other people in a one bedroom apartment and with permission from the Swiss consulate, they were able to add their names to a pass and was granted protection by the Swiss government.
In the closing awful months of the war, Lieber and her family were rounded up and put in a ghetto with 60 other people by the Nazis. Because materials weren’t accessible, she came up with handbag ideas in her mind to escape her circumstances.

When the war ended in 1945, and the Soviets were freeing people from the camps, she and her family were able to return to their home.

3) Her husband is an artist in his own respect

A year after the Holocaust, she met American Gerson Leiber on a street in Budapest. They soon got married and moved to East Hampton, New York.

Gerson Leiber is an abstract impressionist painter and sculptor who has art in over 50 museums notably in the MoMA and the Whitney.

The couple also has a museum on their East Hampton property called the Leiber Collection that opened up in 2005 where many of her creations have been brought back for display.

They also know the understanding of bettering the youth, so they have a scholarship fund for accessories design majors at the Fashion Institute of Technology in New York.

4) She is a favorite of the First Ladies

While working for designer Nettie Rosenstein in 1953. Mamie Eisenhower hired Rosenstein to design her dress for the inaugural ball. To accompany the dress, Leiber designed a purse to match the pale pink number, adorned with lace, pearls, and rhinestones. The acclaim and sensation of the bag propelled her career, and now the bag is in the First Ladies Hall in the Smithsonian, Washington, D.C.

When Eisenhower got re-elected, Lieber designed another bag for the next inaugural ball. Other first ladies such as Lady Bird Johnson, Hillary Clinton, Laura Bush, and Nancy Reagan to name a few followed the trend of the bags at their husbands presidential swearing-ins.

5) Her last handbag was created in 2004, but her legacy still carries on

Her last design was a blue green peacock that she made before she sold her brand. As a result, the new company continued to sell her designs, and in January 2017, Tommy Hilfiger’s wife Dee Ocleppo as co-owner to attract the younger audience by collaborating with Alexander Wang and lower prices.