Next Up: Polly A Speaks On Her Passion For Music and Preaches Self-Love and Unity Among Us

Songwriter, singer and 2013 Soul Train Nominee, Polly A really transpires and embodies everything her music and lyrics talk about. On May 6th, Polly A. performed at the 2017 Rolling Loud Festival in Miami, one of the biggest music festivals next to California’s annual Coachella. She was also one of the two females on the festival’s lineup. With her angelic melodies and strong stage presence, Polly A. had the whole crowd vibing out at the 2017 Rolling Loud Festival.

Polly A was born in Flint, Michigan and was raised by her Jamaican mother in Milwaukee, Wisconsin. She has been singing since the age of 6 and has been in love with music ever since. For those who may not know, Polly A has had a very prestigious career so far. She’s had the luxury of working with some of the industry’s biggest and most respected artists and producers. Polly A was able to collaborate with Toby Gad, who has produced and co-written songs for Beyonce and Fergie. Polly A and Toby Gad collaborated together on the song, “Happy”, which can be found on the film “Hitch” soundtrack. Polly A has also been able to grasp the attention of other major hit makers in the music industry such as Babyface, Stargate, and Cee Lo Green. The songwriter also had the pleasure of working with Alicia Keys and J. Cole. Polly A. composed Alicia Key’s “My Love is Disease” and is responsible for J. Cole’s “Crooked Smile”. In 2013, Polly A. was nominated for Record of the Year for “Crooked Smile” at the Soul Train Music Awards.

Polly A has music in the works as well. Check out our interview with singer and songwriter, Polly A from the 2017 Rolling Loud Festival:

Paulette: So how does it feel to be a part of Rolling Loud being that this is a sold out festival with an audience of 40,000 people.

Polly A: It feels amazing. It feels like truly a blessing. I’m just honored to be alongside, you know some of my favorite artists, Kendrick Lamar, people like that. Then to be one of the only two females a part of the festival it’s just an honor, it’s great. 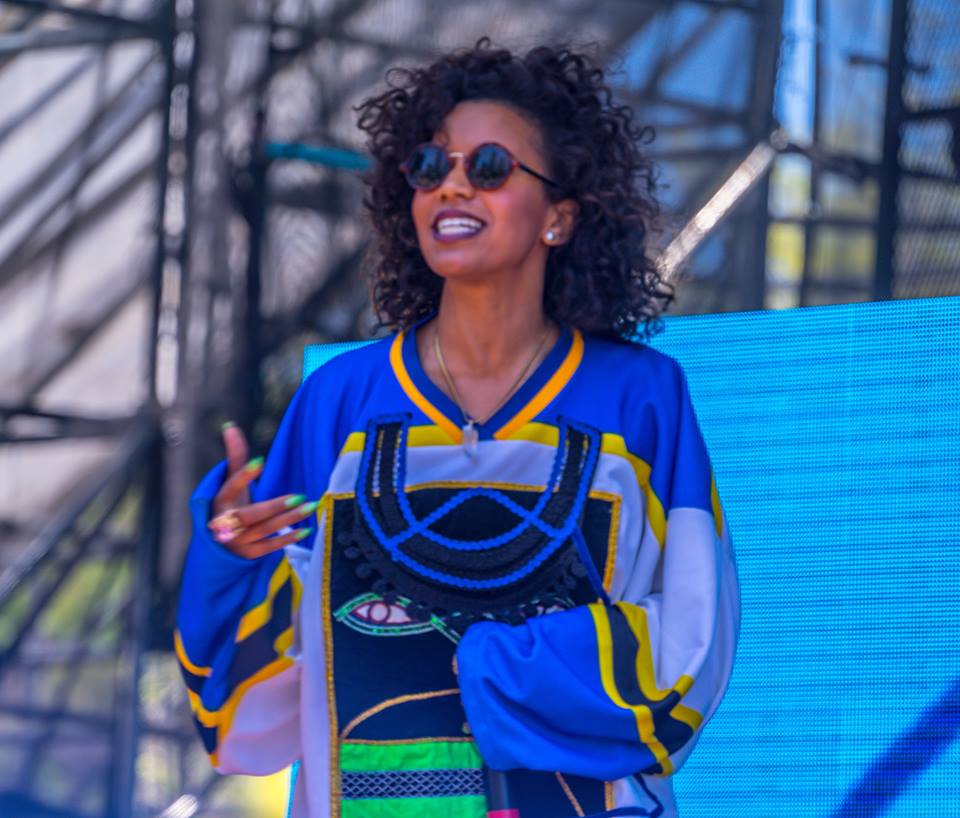 Paulette: How do you deal with the nerves of being on stage?

Polly A: I just try to channel them into why I’m here and my whole performance. But it’s not easy, it’s not easy at all. Just because it’s so many people and you know a lot of these people don’t really know you and know your music, and it’s your first introduction to them. But I just kind of remember why I wrote these songs and what it’s about. It’s about the message and delivering the message to people and making people feel good. So once I remember that, I’m good.

Paulette: So when did you start off in the industry? Like when was your first big hit?

Polly A: Well I started off as an artist, then I kinda got into songwriting.My first big break came when I got a hit song in the  Will Smith film, Hitch movie soundtrack, called “Happy”. Then I did a song called “Love is my disease” for Alicia Keys.  Those two songs kind of solidified me and made people say “Ok cool she really can do this.” But yeah I’ve been singing my entire life since I was 6 years old. I’ve always wanted to sing. I’ve always wanted to write music. I’ve always been obsessed with music.  I always knew I would do music, it kind of chose me.

Paulette: How would you describe your music to someone who has never heard your music before?

Polly A: I would describe it as R&B soul with a hip hop influence. I think I speak about things that aren’t typically R&B related topics, so it takes it outside of just normal R&B. But, it’s still rooted in soul music or classic soul. My favorite singer is Marvin Gaye, so I’ll never stray away from soulful music. It marries a lot of newer things so it’s hybrid music really.

Paulette: So you do your own thing pretty much.

Polly A: I’m inspired by so many people and I just borrow from all of them.

Paulette: You briefly mentioned it already, but who do you consider to be your idol or your inspiration when you write music?

Polly A: My idol is God. That’s my idol. I mean when I’m writing I’m literally asking to just be a vessel and be used in a way that’s for good. But as far as artist that speak to me, Marvin Gaye of course, Lauryn Hill, and Prince are like my top. I also draw inspiration from Bob Marley when I want to feel that certain energy.

Paulette: Aside from writing music for yourself, I know you worked with J Cole as well as Alicia Keys, how would you explain those experiences?

Polly A: Oh man, just truly blessings. Alicia Keys, I didn’t actually get to work with her in the studio. But, she kind of helped solidify me when she was singing a song of mine. That right there put me on another plateau and I guess made people say , “Oh shit if Alicia Keys is singing her song…” She’s so respected. She’s so good on her own. She writes her own songs that are amazing.  It’s just an honor somebody that is that “ill” at what they do would say “I wanna sing your song” !  That was just amazing and very humbling. As for J. Cole, I actually worked with him in the studio.

Paulette: How is he ? Super Humble ?

Polly A: He’s pretty much everything you would think. From his own persona of just  being super chill, super down to earth, he’s just like that. He’s very in tune. You can tell he’s very smart, very just focused. I don’t know… I learned a lot from him in a very short time. He’s just like a very humble guy.

Paulette: How long was the process of working with him?

Polly A: I only worked with him that night. We would meet up to just play the record as it was being worked on, but I haven’t spent that much time with him, it was very brief. However, within that short time, he taught me a lot. He’s really cool.

Paulette: Are you currently working on any new music or new projects?

Polly A: I am. I’m about to put out a “7 song experience”, called “Colors in a Waterfall”. It’s coming out in June. I named it that because each song represents a different side of myself, a slice of my life. I’m also going to the studio to finish working on my album right now. This ” 7 song experience” is kind of a mini album that I’m releasing in June.

Paulette: Do you plan on touring anytime soon? You should come to Atlanta!

Paulette: So if you come down, you’ll have to give us another interview as well.

Polly A: I would love to!

Paulette: So one last thing, in one word what would you say you represent as a whole. Polly A, what does that represent to you?

Polly A: Polly A represents “Oneness”.  I would hope that I’m a light and a reminder to people to come together and kind of see themselves in each other. The kind of understanding that you are a cell of an entire body, this world is alive, and this planet is alive. We are all the cells of this planet, similar to the cells of your body working together to make you live. We have to have this mentality because we have to understand if someone is suffering, you’re suffering, because we are part of the same. My overall message with everything is to be in tune with oneness, to be in tune with yourself, and to love yourself so much to possibly not be able to love another person because you’re gonna see yourself in that person. You’re gonna see we’re all going through the same shit, no matter what. No matter how much they try to distract us, and make it seem like we’re disconnected. I don’t believe that. We are way more connected than they would like to admit. I think that’s one of the most beautiful things about being an artist. We can bring people together on one wavelength. They can all look around and we’re all fucking jamming to the same song. We’re all here together, on the same vibration on the same wave. That’s really who we are. I just want to be a reminder.

In all, the singer and songwriter, Polly A wants to deliver her fans with the message of “Oneness” and self-love. Polly A confirmed she is currently working on new music. Therefore be on the lookout for Polly A’s newest project releasing in June.