It’s Time to Familiarize Yourself With LOLO

Up-and-coming pop sensation, LOLO, turned heads in a soulful performance at Colorado’s Red Rocks Amphitheater on June 5th during a “Film on the Rocks” event. As thousands flocked to the music venue to watch Dirty Dancing with a crowd of fellow fans, LOLO was backstage preparing to live out a dream.

She walked on to the stage with an air of confidence in her black and white striped pants, leather jacket and pinkish blue tie-dye shirt. With band members on guitar and drums, she took to the microphone and began her once-in-a-lifetime performance at the iconic venue.

It seems nearly impossible that such a powerful sound can come out of someone so small, but LOLO has mastered the art of letting it shine. Her vocal chords seem rooted into the heart of music itself, twisting and turning up the tree trunk to finally expand in leaves and branches for us all to enjoy. Simply put… Damn that girl can sing!

Not only is her voice incredibly impressive, but her songs are all hits. With a catchy tune, clever lyrics and a groove that won’t quit, it is inevitable that you will feel the funk.

Her newest album, “In Loving Memory of When I Gave a Shit”, is impeccably titled and even more well put together. In exposing herself through true honesty about who she is and how she feels, the album seems to hit home for many.

She performed several songs off the album for the Red Rocks performance, including “Heard It From A Friend”, “I Don’t Wanna Have To Lie”, “Dandelion,” and “Shine”, which was featured on The Bachelor in late January. She has stated that it is a song about struggling with anxiety and depression. 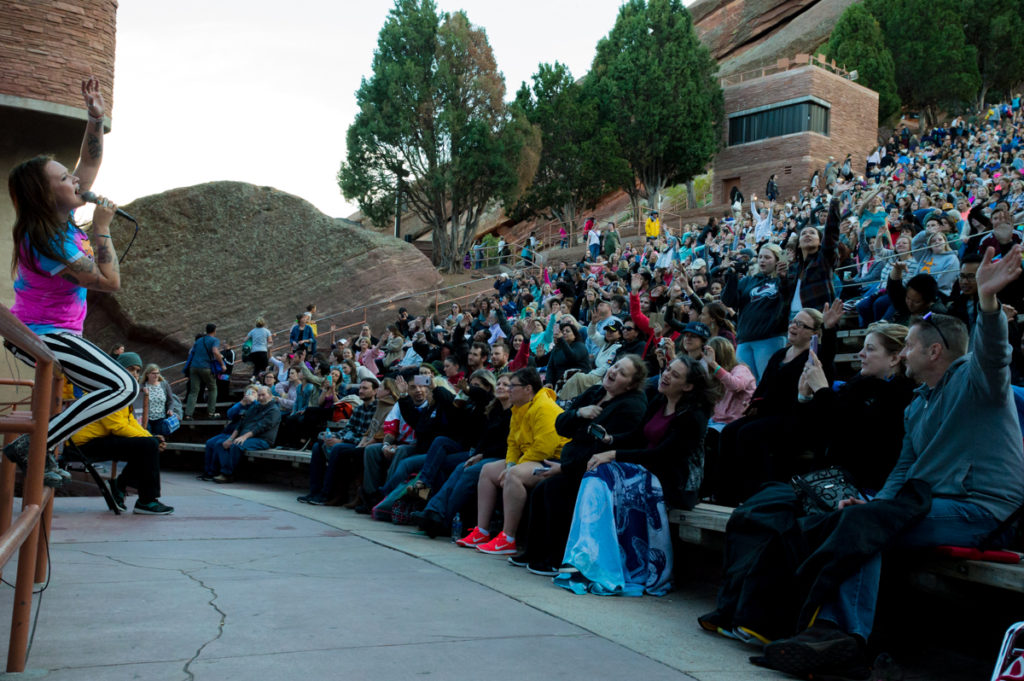 LOLO has an impressive background as well, starting with a Broadway appearance in Spring Awakening under her belt, performing as the original Ilse, when she was still known as Lauren Pritchard. She has also written the music and lyrics for a separate musical, titled “Songbird”, and was featured on the single “Miss Jackson” by Panic! At The Disco.

It is clear when she performs that music lives within her. From goofing around and dancing to talking with the crowd, LOLO provides a fantastic concert atmosphere and she is most definitely a star on the rise.