This year the Metropolitan Museum of Art, in New York, is filled with celebrities dressed from head-to-toe in the controversial theme “Heavenly Bodies: Fashion and the Catholic Imagination.”

This year celebrities created mirrored renditions of Catholic iconography and religious artistry. We wanted to share the details about a few of our favorite celebrities, in no particular order. 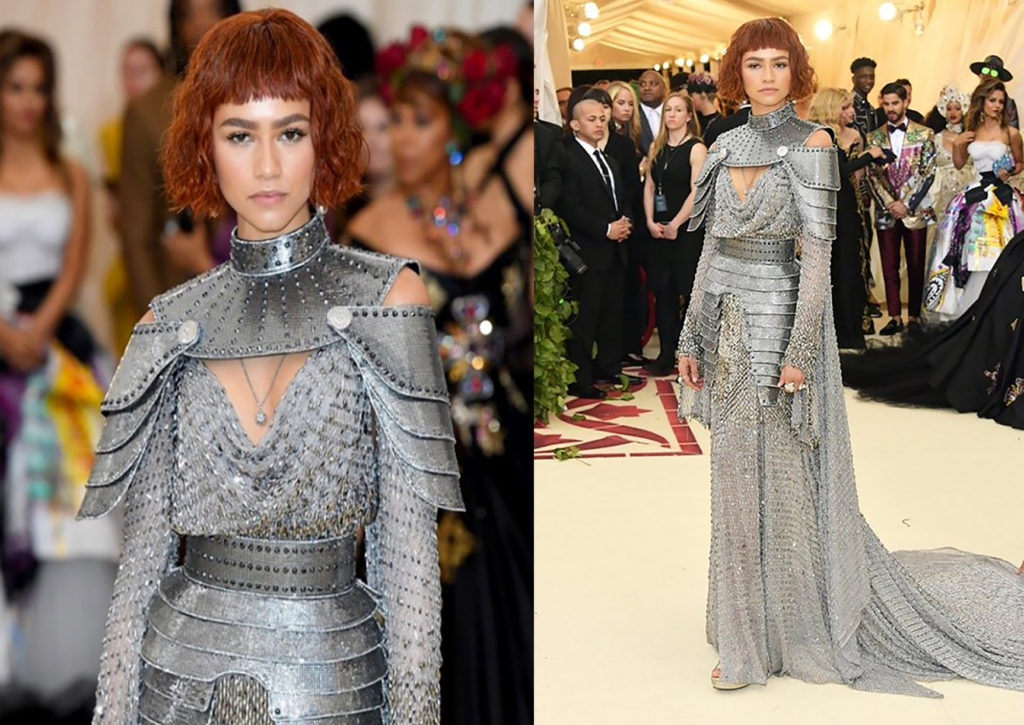 The young fashionista wowed us all with her chic bob with a blunt chop and bangs. The KC Undercover star had atomic red hair dye. According to her hair stylist Law Roach, Zendaya’s hairstyle was inspired by Joan of Arc, a French heroine. Her chainmail gown was designed by Versace. This was a spectacular rendition of Joan of Arc’s androgynous look. 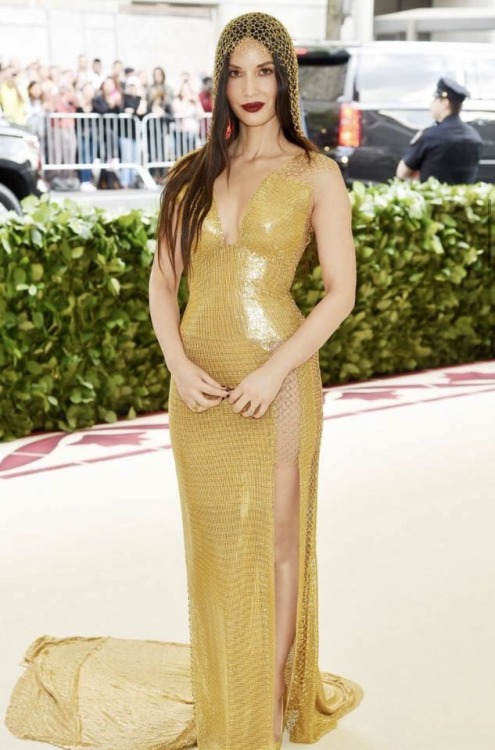 The actress and model wore a jaw-dropping gold chainmail that was astonishingly designed by H&M.

“Munn also noted that the designers really took into consideration the “Heavenly Bodies: Fashion and the Catholic Imagination” theme and drew inspiration from The Crusades.”

Munn recounted the events leading up to the Met Gala. She described how she and her team were scrambling to present a perfect look.

“This is a really intricate dress,” Munn says. “I was in a sprinter van on the way here and had to be sewn into this. It’s all chainmail, so if something pops, I’d be in trouble.” 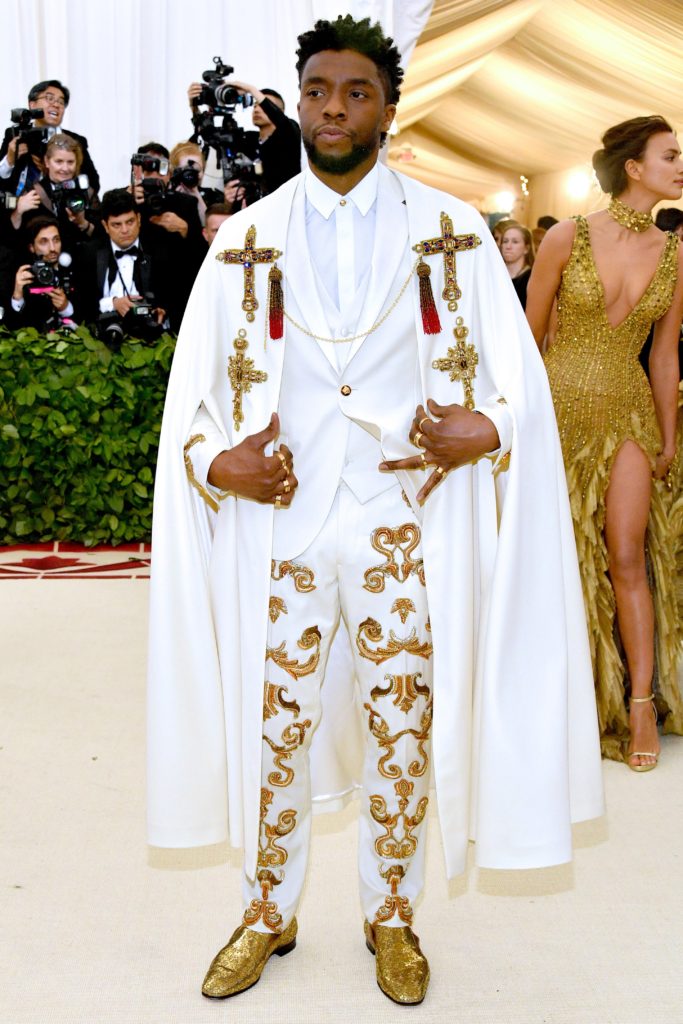 The Black Panther star enrobed himself in a papal robe overtop a cream tuxedo with intricate designs of gold crosses. Boseman’s pants had the popular gold Versace designs with all gold shoes to match. Fans of the actor enjoyed how much he embodied the theme of Met Gala 2018 that they had to post and rave about it all over Twitter and Instagram.

The fashion mogul gracefully walked the red carpet in jewel-encrusted Maison Margiela gown. Folks you won’t believe this but Queen Rih apparently borrowed the mitre style from a real cardinal.

In an interview with SiriusXM’s The Catholic Channel, Cardinal Timothy Dolan, the head of New York’s Roman Catholic diocese, revealed that he, in fact, lent Rihanna the mitre.

Dolan says,“The news said she was wearing a tiara,” he continued to say, “She gave it back to me this morning…She was very gracious.”

According to Cardinal Dolan, the icon volunteered to do some confirmations. If you doubted her then there should be no reason to doubt her abilities as an artistic, creative director, and fashion icon. 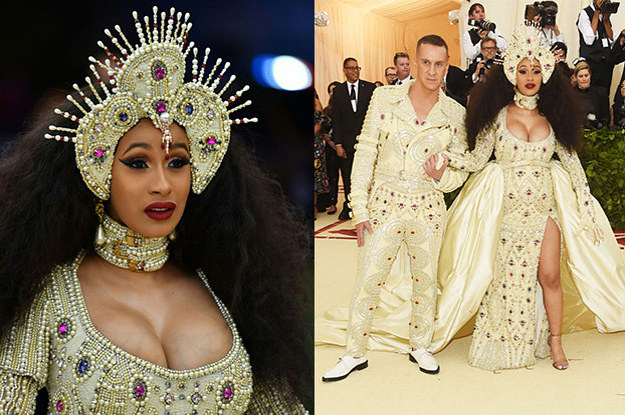 The Bodak Yellow star surprised us with her beautiful gown created by Jeremy Scott. Sources say, from an interview with the New York Times, she wore a 30-pound pearl-encrusted dress the color of cream made of gold, a faintly lustrous silk duchess satin overskirt that billowed like summer cumulus, gem-covered gloves that stretched to the shoulder, a jeweled halo headpiece, a thick buckle-and-pearl choker and colossal pearl drop earrings

In the interview with the New York Times Scott frequently dresses Cardi B in bold retro rainbow colors for performances. Scott said the look was “very inspired by Vatican tapestries — the whole, kind of, embroidery of deities.” Apparently, the dramatic headpiece was meant to represent the Virgin Mary.

Jokingly, he says, “You know, like Mary, she is pregnant. But she knows who the baby daddy is.” 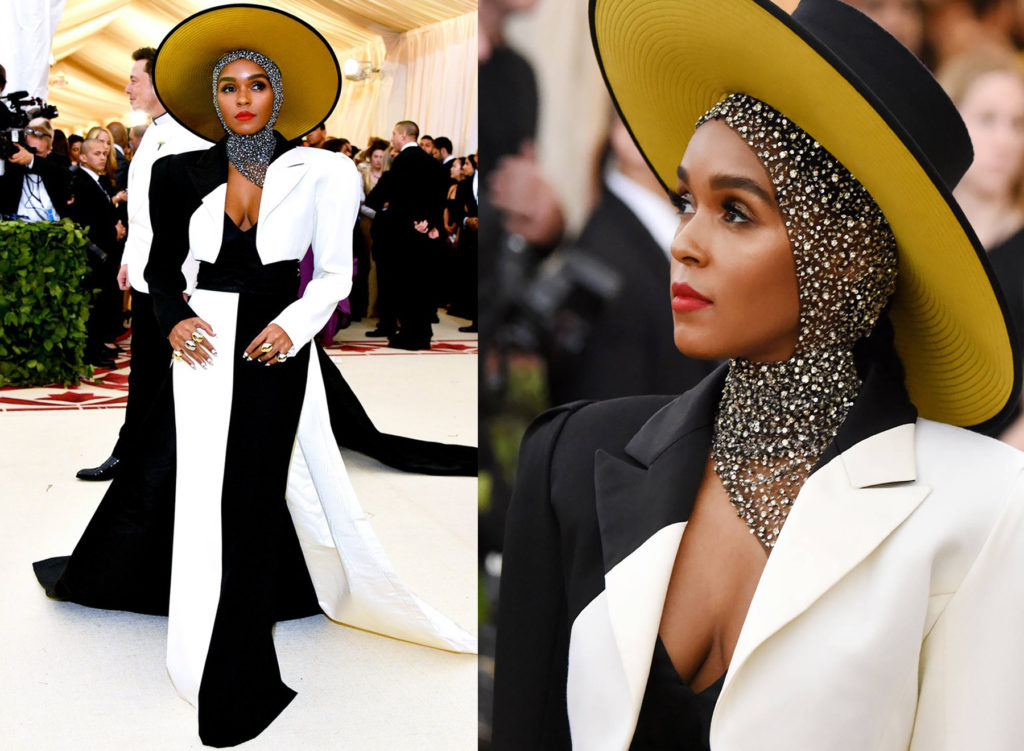 The singer, songwriter, producer, dancer, and actress wore a Marc Jacob’s creation. According to Vogue, the superstar is inspired by the Dirty Computer album which is her third studio album. The chain headwrap and gold halo hat paired with the color blocking of black and white created an interesting look for the  Heavenly Bodies: Fashion and the Catholic Imagination theme. 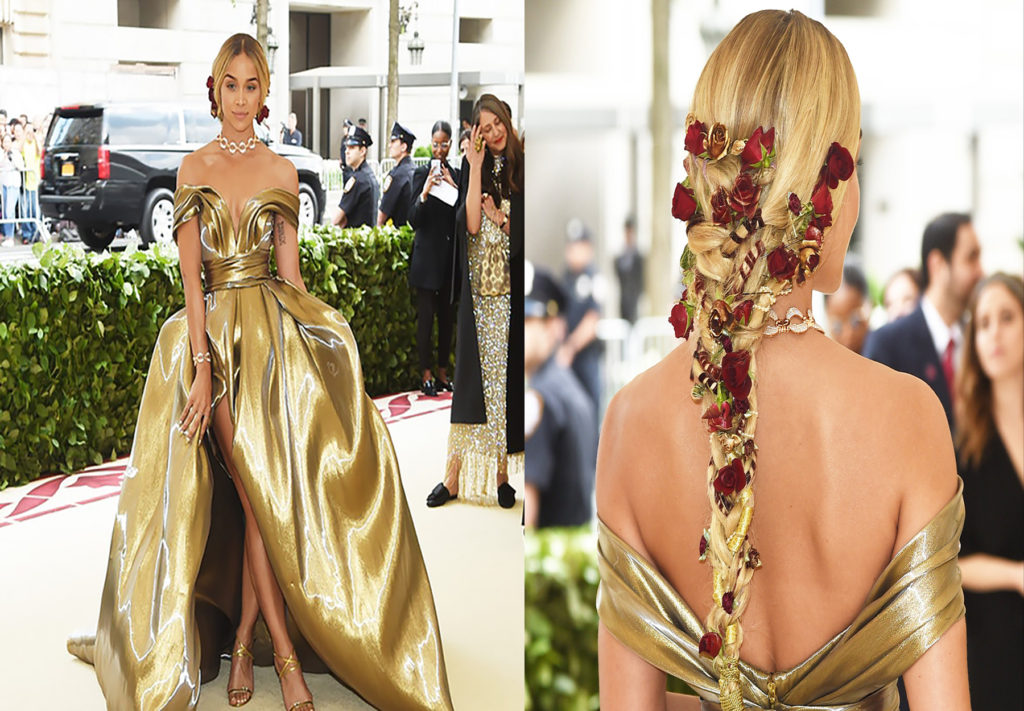 This is Sander’s first Met Gala. Believe it or not, Jasmine Sanders was wearing an H&M creation that was inspired by her nickname “Golden Barbie.”

The model and actress had red roses woven into her long golden extensions. Sanders and her team had begun to work on this look in February.

“It’s just such a gorgeous, playful dress and they really nailed it when it came to making something for me,” she raved.

Incredibly, the list of celebrities that stuck to the “Heavenly  Bodies: Fashion and the Catholic Imagination” theme is very long. Big names like singer and actress Solange Knowles, singer/songwriter SZA and actress Sarah Jessica Parker. Despite, the backlash for the theme the Met Gala 2018 is an event that we will not forget.