It’s not often you see Black culture and the soccer community merge to create something bigger, that allows diversity and fresh outlooks. That’s exactly what the Black Arrow x LA Galaxy partnership has done with their latest project featuring Azjah, The Princess of Compton.

Black Arrow’s partnership with LA Galaxy focuses on bringing Black Culture and soccer culture together for people who are already fans to creating new fans, like Azjah, through their cultural experiences. Having Azjah as the star of the new project expresses that the movement is for all ethnicities and backgrounds while breaking barriers with no limitations on what one can do.

This past weekend showed just that for the young rapper, as she shined a light on her city, stood tall on the LA Galaxy soccer field, and continued to focus on her music. True Urban Culture had the pleasure of documenting these moments that are expected to be a few of many for the talented artist, and the Black Arrow brand itself.

The collaboration included a full weekend of events for the young Compton star and Black Arrow. It kicked off with a Pop-Up Party event at Vector90, known for investments by the late Nipsey Hussle, on Friday, March 6.

Several family members and friends came out in support of the new movement, as attendees were also able to get an exclusive listen to Azjah’s new EP On One, while it played throughout the event. Displayed neatly on the tabletops of Vector90 were photos of the Compton’s Princess in a custom-made Herbalife, LA Galaxy jersey captured in her local area. To go along with it, was a big screen of a short film showcasing her roots of Compton, thoughts of the soccer movement, and what LA means to her.

Do you remember your first soccer match? We'd like to introduce y'all to the rapper @azjah_ , “the princess of Compton,” who is about to attend her first ever match at the @lagalaxy home opener.

Although she enjoyed the celebration at the Pop-Up Party, the humbled rapper still made time to head back to the studio to finish up touches on her newest, eight-track EP, On One. The EP is expected to drop soon and features Long Beach’s $tupid Young and new artist King Tiu. The concept of On One falls back to her roots, in which she was giving the name “On One” by her father’s friends because of how bad she was growing up. Azjah explained to TUC that her previous album and new EP are completely different from each other.

“It shows a different side of me,” Azjah said. “It’s a major growth from Princess Diaries — my first project … I went radio for the EP ‘cause Princess Diaries is like storytelling — the EP I wanted it to be more fun. It still got that pain music to it, but it’s fun.”

The Compton native sat in the Beverly Hills studio running through a verse several times to make sure she was satisfied with what was blasting through the producer’s speakers. Once she was done, she began creating another song from a beat she had recently received, while taking time to ask others around her for their thoughts, then shortly going back in, and going off the top with the bars. The late-night session came to an end after developing the base of the new song. 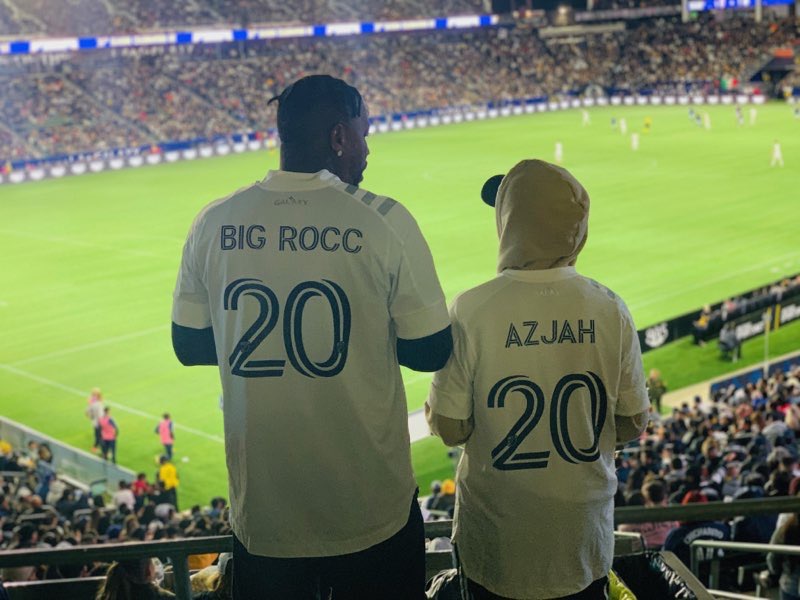 The next evening on March 7, Azjah stepped onto the Digital Health Sports Park in Carson, CA, where the LA Galaxy soccer team plays, making it her first time experiencing a game while being the face of an impacting movement.

“Man I feel like a superstar, I feel like I belong there,” Azjah expressed. “I didn’t even know that Carson had that big ass stadium like that man, it really felt good … It was amazing just seeing all the beer, popcorn, hotdog, [and] kids running around. I met the mascot. I met the owner. I actually have a good relationship with the owner now, so there’s more in store, but I really had a good time, and I enjoyed myself.”

what a moment ! thank you @lagalaxy @blackarrow_fc LETS GO 💙💛

Azjah also mentioned that while she was there, she observed how diverse the soccer game was, and felt optimistic about the collaboration with Black Arrow.

“I seen so many different types of races and ethnicities, so I think it’s going to be good,” Azjah said.

To close out the long, eventful weekend, aside from the collaboration, Azjah went back to her roots in the Wilmington Arms projects in Compton for the video shoot of “Memo” featuring herself, RjMrla, Rucci and $tupid Young. Many people close to her came out to support, and some people she didn’t know but welcomed with open arms. Either way, it seemed as if everyone knew each other by the end of the shoot, because they were all turning up and having fun with each other.

“Love! I Love it, man!” Azjah expressed when asked how she felt on the video shoot set. “I think it’s great. I had so many people I don’t even know come out, so just to have that support makes me feel great. I think this video’s going to be one of my favorites.”

The Black Arrow x LA Galaxy collaboration with Azjah is an example to the young generation that expressing your creativity, working hard and being your true self can make dreams come true. It also gives the generation hope that there’s more for them beyond the barriers people try to place on minorities from low-income areas like Compton.