What’s Beef, and What’s Too Much Beef?

Write a song trying to convince Roxanne to give up prostitution, end up in the Rock and Roll Hall of Fame. Write a song dissing Roxanne for not wanting to hook up with you, and prepare to face the fury of Lolita Shanté Gooden, tearing into you and your homies over your own beat.

UTFO’s “Roxanne, Roxanne” ignited what may have been the earliest rap beef in history, all the way back in 1984. Upset that the group had cancelled a performance, legendary producer Marley Marl enlisted Gooden to record “Roxanne’s Revenge” under the name Roxanne Shanté, and the track became an instant hit on the airwaves. Eventually, a plethora rappers hopped in on the subject, and the ensuing “Roxanne Wars” would continue until The East Coast Crew ended it for all intents and purposes with “The Final Word – No More Roxanne (Please)” in 1985.

Of course, rap beefs wouldn’t end with the Roxanne Wars, and would only grow in calamity as hip-hop evolved. Soon enough, we’d have vicious verbal attacks at former group members, a parade of beefs at Hot 97’s Summer Jam, and bursts of devastating memes to commemorate each rivalry. And of course, a widespread territorial war that would take two of hip-hop’s greatest emcee’s before their time.

Sometimes, egos swell out of control, and blind fury can cause rappers to cross the line trying to prove their dominance. Beef is part of the culture, and the ability to out rap your enemy is critical to a successful career behind the mic, but how do you know when it’s time to move on?

It’s an interesting question, as the remnants of rap beefs can linger for years if there’s no public reconciliation, and sometimes even that won’t stop it from dragging on. And of course, the bigger the insults get, the harder it is for either side to see a reason to make peace. When JAY-Z and Nas clashed in the late 90’s, it took Hov’s own mother to force him to apologize after violating the unspoken rule of not attacking the women and children in your enemy’s circle. Ice Cube essentially obliterated what was left of N.W.A. when he dropped “No Vaseline” in 1991, and one of the reasons the group never seriously retaliated was because they all started feuding with each other.

Both of those rivalries are long over, and the respective sides have all made peace with each other. That they were able to de-escalate the beef before verbal attacks went too far goes a long way into how they are perceived today in hindsight. It can be hard to see the bigger picture when you’re consumed with destroying your enemy, but knowing how your feud is impacting the world around you is critical. Suge Knight lost sight of this when he took direct aim at Bad Boy Records during the 1995 Source Awards in New York City, bringing the combat into the eye of the mainstream media. Seeing the potential for huge profit, Death Row vs. Bad Boy became publicized to the point of exploitation, swelling out of control until Tupac and The Notorious B.I.G. were both gunned down in the streets. One of the first instances of rappers receiving national media coverage, it gave the genre a black eye as it helped define how much of the country viewed hip-hop.

If there’s no tangible moment to end the feud, both sides need to know when to simply walk away, even if it’s gone too far for a friendship to be restored. Less than five years after Tupac and Biggie’s double murder, beef between 50 Cent and Ja Rule started after a physical altercation outside an Atlanta hotel. 50 made quick work of Ja Rule’s career, yet over a decade later the rapper is still taking petty shots at his old foe whenever possible.

When grown men are unable to come to an agreement over such a long period of time, or at least manage to stay out of each other’s lane, there’s going to be a significant stain on their respective legacies. Ja Rule is forever remembered in hip-hop lore for his utter embarrassment at the hands of 50 Cent, and even though 50 emerged victorious there’s still a level of pettiness that’s attached to his name for his inability to move on (and for all the other feuds he finds himself in). You can argue that Pac and Biggie are remembered for their feud just as much as 50 Cent without it detracting from their stature, but those two rappers still held respect for each other outside of the booth.

A little beef is essential in a healthy musical diet, but moderation is everything. Some of hip-hop’s most memorable tracks are diss tracks loaded with venom, and the controversy often brings out the best of artists. But if you’re thinking of starting a rap war over an unforgivable offense, just make sure you’re keeping an eye on the situation and how it looks to others. 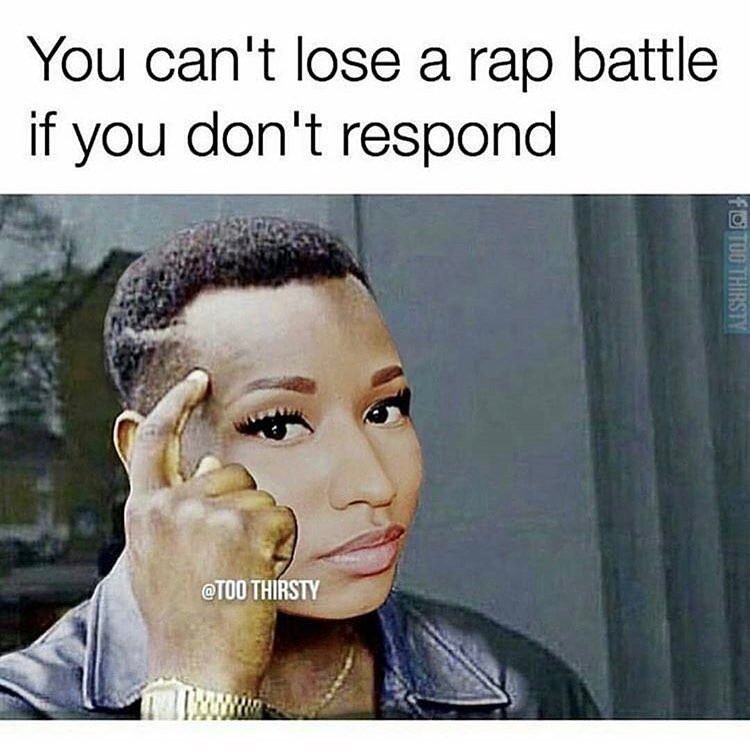