Change the game; change the world – How important is the world of sport in supporting the BLM movement?

Despite the general mess that 2020 has been so far, there have still been some positives. One of these being the resurgence of the Black Lives Matter movement and its influence on a global scale. The movement refuses to be silenced as BLM protests in both Portland and Oregon continue. Due to the consistency and persistence of the movement, it’s moral message of racial equality has exploded out of the expected protest space and entered new areas and industries. As a result, the message has been echoed throughout some of the largest theatres of sport; the Premier League and MLS. These sporting institutions are crucial in the continuation of raising awareness for racial injustice and the implementation of real change in regard to unjust discrimination. They provide a great vehicle to move some of these delicate conversations into discussion through not only their own platform but the platforms of the players as well. The world of football is a space that unfortunately isn’t free of racial discrimination, thus, it is essential that active sporting organizations and players continue to voice positive messages of equality and amplify the BLM movement.

Since the unjust murder of George Floyd, both the English Premier League and MLS have actively taken part in the fight to eradicate racial prejudice. During the first 12 games of the Premier League restart, the names on players’ shirts were replaced with the slogan “Black Lives Matter”. Such a change clearly displayed that the Premier League, an institution that previously resisted the inclusion of political messages into their games, was openly endorsing the moral message of the BLM movement. Through this replacing of players’ names, it meant that the message couldn’t be torn away from the viewers’ gaze, it took priority. Furthermore, after these 12 games, a BLM badge (designed by Watford striker Troy Deeney) was placed upon the sleeve of the team’s jerseys. Whilst this decision to bring politics into sport came under criticism from certain viewers the Premier League refused to remove the badge and instead stood firmly with the goal of deconstructing any type of racism. Similar actions took place during the restart of the MLS as well. More than 100 MLS players took the knee before the ‘MLS is back’ opening game, additionally, they adorned tops with the words “Black and Proud” as well as “Silence is Violence” upon them. These actions whilst remaining peaceful are extremely influential within the grand scheme of things. With a combined potential viewership of 4.8 billion, these leagues can work as great catalysts for positive change. Both the MLS and Premier League can push statements of racial justice into households all around the world, whilst simultaneously transforming stadiums into spaces of protest. In amplifying the message of equality and actively spreading awareness these sporting institutions can encourage fundamental, socially conscious changes to be made on a worldwide scale. 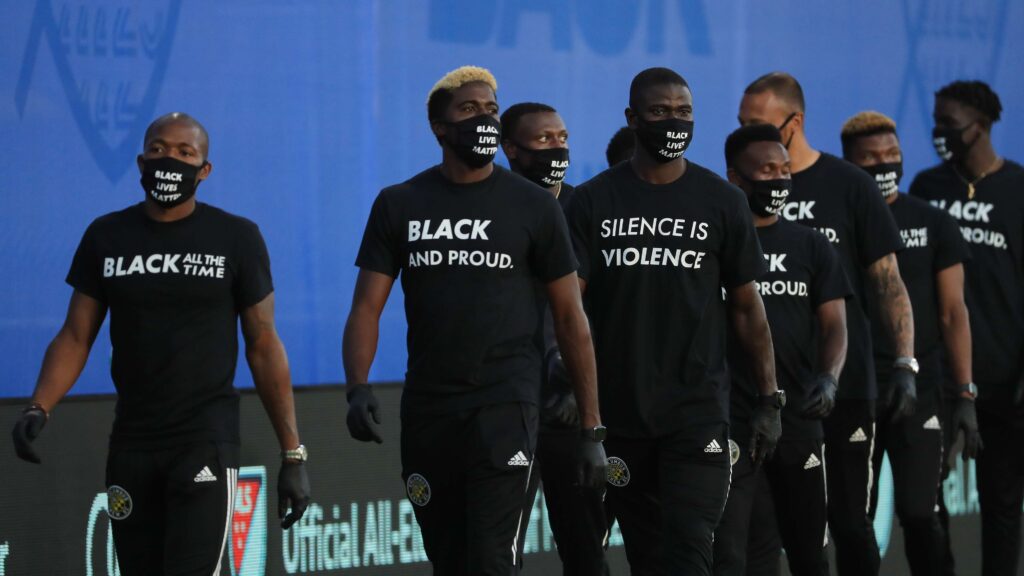 With the new Premier League season starting in less than a week, I suppose we must question if this support towards BLM will continue. Recently all 20 Premier League clubs met and decided to take the BLM badges off their kits, instead choosing to replace them with the image of a new anti-discrimination campaign. Furthermore, the league has stated that players are still permitted to continue taking the knee in honour of the movement. Therefore, this calls into question the importance of politically active players to maintain the voice of equality and to cement the BLM movement upon the big screen. Since football’s restart, there have been multiple players who have taken the importance of strengthening the movement into their own hands. One of which has been Arsenal’s star striker Pierre – Emerick Aubameyang, an individual who has seized the big stage in both a sporting and political sense. He has frequently used his social media presence to elevate the importance of the BLM movement, and encourage the objective of “eradicating racial prejudice wherever it exists”. Similar to the Premier League and MLS organizations, footballers have massive platforms through their social media to influence millions of fans. For many, the likes of Aubameyang are huge role models, and thus, in depicting these socially conscious statements footballers can hopefully liberate the next generation from any racial prejudice.

Whilst the utilization of social media is crucial, it is also important for players to act upon the big screen through physical messages of black solidarity. During a pre-season friendly against Brentford Aubameyang and the Arsenal team did precisely this. Arsenal manager, Mikel Arteta, revealed in an interview with Sky Sports that before the game Aubameyang had called him and informed him that the players wished to set up a protest before the game by taking a knee and wearing clothes adorning supportive messages towards the BLM movement. Through players being openly active in regards to racial equality, it sets the football aside for a moment and instead draws our attention to a more urgent matter. Another player who like Aubameyang has openly voiced his support for the BLM movement is Manchester City’s winger Raheem Sterling. Within the world of football, Sterling has perhaps been the most open about his disgust for racial injustice and the need for more black representation. Whilst he is often active on Twitter in advocating the importance of change, he takes it to a new level through frequently speaking out in various interviews and making the black voice heard; making him a true sporting figurehead of racial equality. During an interview with the BBC in mid – June Sterling made clear the importance of making sure a powerful black voice is not only heard but maintained: “keep talking, keep fighting”. Sterling’s constant speaking out on racial matters keeps the conversation alive, thus, forcing people to realize the need for fundamental changes in support of racial equality. For too long now the voice of the oppressed has been muted and through the likes of Sterling highlighting this oppression, hopefully, it will encourage people to intensify this previously suppressed voice and as a result create real change. It’s this step toward real change that is essential and something which Sterling has again openly stressed to the public:

“This is something that needs more than just talking. We need to actually implement change and highlight the places that do need change”

Through active, socially conscious players, such as Sterling, this change will come; they keep the message within the limelight and booming throughout not just the world of sport but their local communities as well. Change will happen. 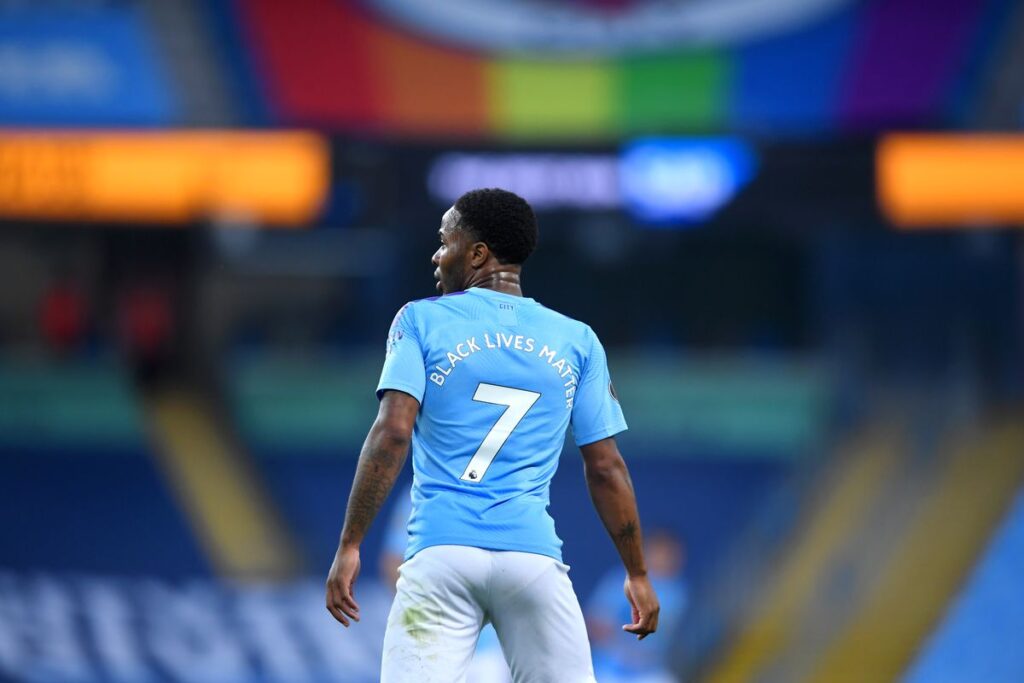 Within the MLS we have witnessed not just active individuals, but active player associations, in the form of the ‘Black players for change’ organization. Run by Toronto FC defender, Justin Morrow, the group now has over 170 players signed on and encouraging real social change. Morrow stated that he is looking to fight for change on two fronts both “within the MLS” through increasing the black representation in executive roles (which currently sits only at 2%), and simultaneously through “an initiative where we want to help in our local communities to address systemic racism.”. Through players supporting the message, they both spread the importance for change to the league’s viewers and also pressure sporting organizations to adapt to a new racially equal sports industry. The group wishes to set up mentorship programs for young black and minority academy players to ensure that they have both equal opportunities and clear pathways to become successful. BPFC is taking initiative both on and off the pitch to elevate and amplify the black voice as well as support black communities. Hopefully, this organization will continue its support of racial equality long into the future. 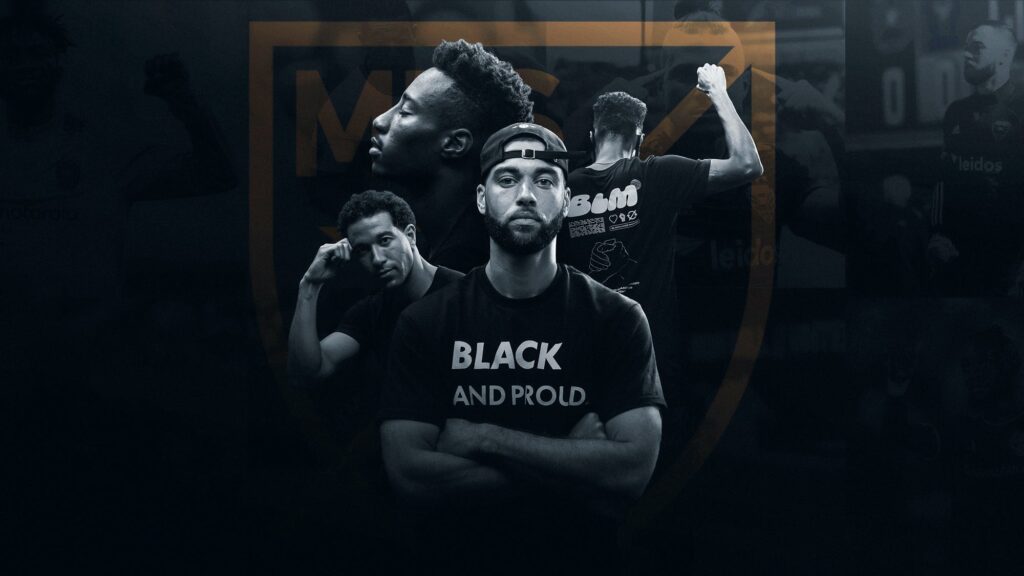 Ultimately, the footballing industry has been a great active force in supporting the Black Lives Matter movement. Through both the leagues and players tapping into their platforms, they have been able to echo the message of racial equality to the masses. However, more still needs to be done. Acts of discrimination are still taking place, such as the recent shooting of Jacob Blake and a new statement from the BBC suggests that reports of discrimination in the Premier League alone are up by 42% from last season. Players and leagues must remain active in their support for the fight towards racial justice as they have the potential to catalyze real fundamental change.

Change the game: change the world.