1,218 Other Candidates: Independent Politics and Why Don’t Aren’t We Voting For Them ?

Although the first-ever president was from an independent party, there has never been another one elected in the 230 years since. Despite these narrowing odds, according to the Federal Election Commission, 1,218 people filed to run as of 13th October. Thus, this begs the question of why do so many compete when the US is such a partisan country when it comes to the two dominating political parties – Democrat and Republican.

The Pew Research Center took a detailed report and found that a staggering 38% of Americans identify with independent politics, which may lead one to question how this huge proportion is not represented in the media or voting tallies. This is because only 7% have no leaning whatsoever, which means the other 31% tend to vote for whichever of the two major parties they sway towards, even if they don’t necessarily support all their views. Furthermore, it must be argued that it is time for a political change when it comes to the leading parties, and perhaps this is the message that over 1,000 candidates are trying to push forward. 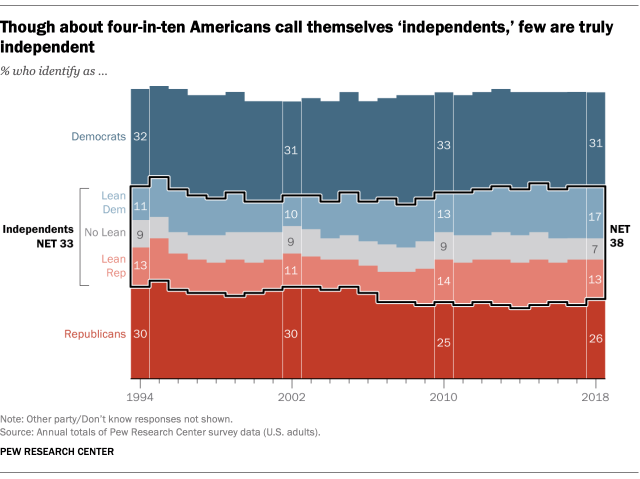 However, The New Republic believes that regarding the circumstances of the political world as we know it, there are only ever going to be the two main parties for the foreseeable future. ‘Today, third parties can’t mount their own presidential bids after they learn whom the two major parties have nominated—there simply isn’t enough time between the end of the primary season and the general election to gain meaningful ballot access in enough states to win an Electoral College victory. Evan McMullin, the former CIA operative who ran for President in 2016 as an anti-Trump alternative to Hillary Clinton, was only able to get on the ballot in 11 states because he entered the race so late. It would’ve been easier in the 1800s: McMullin wouldn’t have had to collect millions of petition signatures and hire expensive lawyers to get on the ballot.’

Overall, it would take a lot to overthrow the two political spheres that dominate the country, however, it may be the only way to have a generational change in how we see the country governed.